The Society of Photopolymer
Science and Technology - SPST

The Photopolymer Science and Technology Award No.201101

The Photopolymer Science and Technology Award No. 201101, the Outstanding Achievement Award 2020 was presented to Dr. Masao Tomikawa for his outstanding achievements in photo definable polyimides science and technology including the photo reaction mechanism of the Ionic-bonded-photosensitive polyimide, and the pioneering development of positive photo definable polyimide by partial esterification of poly(amic acid) for semiconductor stress buffer and for the organic light emitting diode (OLED) displays. In addition, he contributed the Cu compatibility study for the improvement to long time reliability of the polyimide and Cu interconnection. 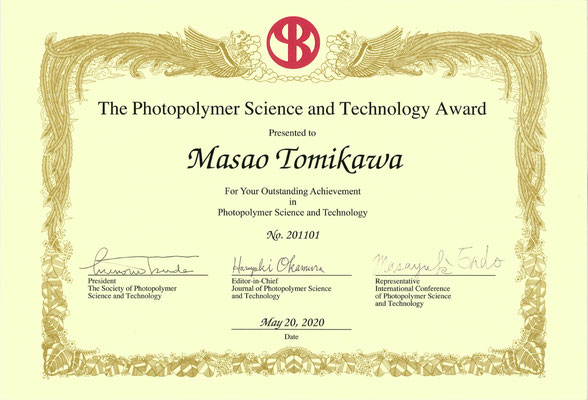 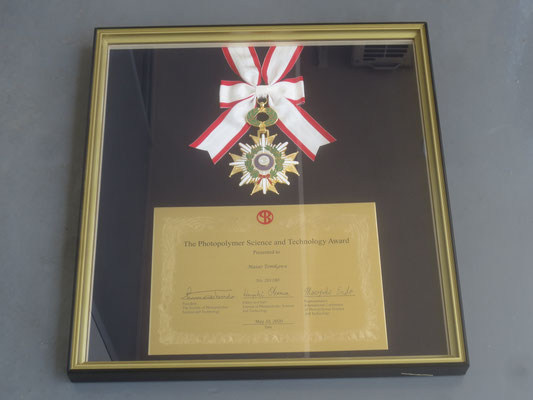 He serves for many years on the Program Committee Member of ICPST( The International Conference of Photopolymer Science and Technology).

He received BS and MS degrees from the University Tokyo in 1984 and 1986, respectively. In addition, he received Ph.D degree from Tokyo Institute Technology in 2011. He has studied the soluble rigid polyimides in the Institute of Polymer Science at the University of Akron from 1992 to 1994 as a visiting scholar.

His most important contribution to the photo-definable polyimides chemistry is that he found the novel partial esterification reaction of PAA by using  dimethyl formamide dialyl acetal (DFA) [2]. The dissolution rate of the partial esterified PAA to alkaline solution was controlled precisely by an addition of DFA. He reported that the novel positive-photo-definable polyimide by using the partial-esterified PAA and diazonaphthoquinone compounds.

In order to obtain high sensitive and precise pattering positive-tone-photo-definable polyimide, he examined the polarity of poly phenol compound of photo-reactive diazonaphthoquinone compounds [3]. He found that the diazonaphthoquinone compound composed of low polar polyphenol was tended to gather in the surface region. Thus the dissolution contrast between exposed area and unexposed area at the surface region is extremely high when using phenol compounds which has the low dipole moment. In addition, he invented the novel-polyimide-back-bone structure for the positive-tone-photo-definable polyimide [4] and commercialized [5]. The developed positive tone photo definable polyimide was applied for semiconductor packages [6]. In addition, he and his co-researchers developed the photosensitive polyimide for the advanced semiconductor-chip-scale packages [7].

He and his co-researchers examined the polyimide structure and composition to design the high elongation stored at high temperature for long time reliability [8].

They studied for the improvement of Cu compatibility with polyimides. Interconnection structure of photo definable polyimide and Cu became much more important for the advanced semiconductor packages. They examined Cu atom and ion diffusion into the polyimide layer, and the void formation between Cu and polyimide mechanism. They found that the void was formed due to the diffusion-rate difference in Cu atom and Cu ion [9]. The study of the Cu-void formation is quite important for the material development. Thus he awarded from the Pan Pacific Microelectronics Conference as a best paper. By using the knowledge, they demonstrated a panel level re-distribution layer on a glass panel substrate for the advanced Fan-Out Packages [10].

To use the photosensitive polyimide in manufacturing production line, he examined the effect of exhaust at the polyimide soft baking and found to show high photo sensitivity when baking under the high exhaust pressure [11],

From the view point of basic studies, he examined the photo-induced-properties change in the novel soluble rigid polyimides [14]. He found that the anion radical formation in dianhydride moiety in the polyimides, and the reduction viscosity change and solution color change. Those facts are important to understand the photo reaction of aromatic polyimides.

In order to apply polyimide for new fields, he investigated to develop the positive-tone-photo definable polyimide with the high refractive index by dispersing TiO2 nano particles [16]. The high-refractive polyimide pattern is suitable for micro lens of the image sensors. Moreover, he and co-researchers developed the high-thermal-conductive-polyimide sheet which has extremely low interfacial heat resistance [17,18]. They developed low modulus polyimide to adhere well to substrate.

Finally, he reported that the application of an aromatic polyimide using as a binder resin of Li ion battery [19]. AIST researchers obtained stable and high-power-Li-ion battery by using this polyimide binder. The operation temperature range of the battery was from -50 to 125 oC due to good stability for the polyimide binder.

Recently, he focused on the low-dissipation-loss polyimide for 5G and millimeter radar applications from the view point of the molecular motion of the polyimide [20]. This work shows that the polyimide is able to apply at the high frequencies in molecular design. Those works show to enlarge the application fields in polyimides.

He is a pioneer of the photo definable polyimides not only from the view point of the industrial applications but also the basic studies.

His works were far ahead of its time and his contribution and originality are outstanding. With these achievements, the Outstanding Achievement Award 2020 was presented to Dr. Masao Tomikawa.

The Photopolymer Science and Technology Award 202101 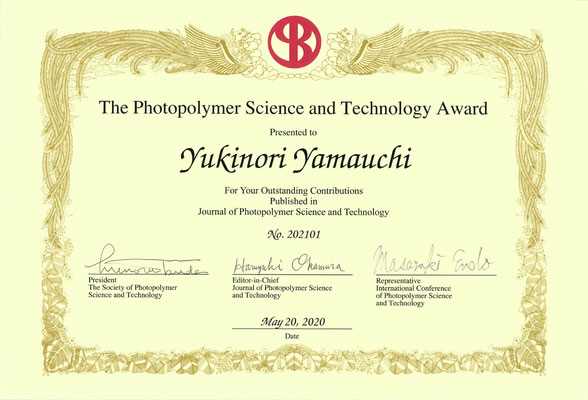 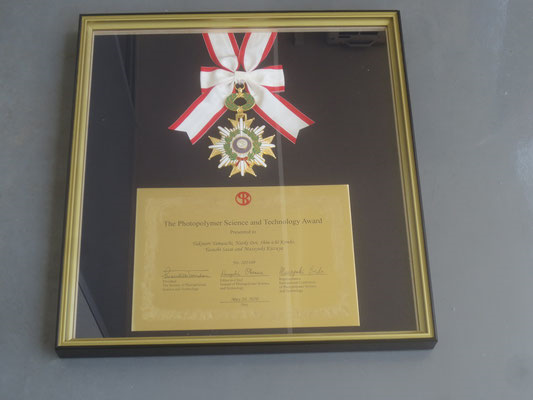 The development of a sustained- and controlled release system for drug delivery is one of the most active areas in drug research. Particularly, the polymeric prodrug, a chemical approach using reversible polymeric derivatives, is useful in the improvement of the delivery to appropriate targets and the optimization of the clinical application of various drugs. A number of studies of polymeric prodrugs which have been attached variety of drugs onto polymeric materials to impart desirable characteristics have been reported [1-3].

Over the years, Prof. Kuzuya and his co-researchers have been working on the development of controlled-drug release systems using plasma-assisted method, which are applicable to oral, topical and injectable formulations [4-11]. As part of their ongoing program to develop the polymeric prodrugs of nonsteroidal anti-inflammatory drugs (NSAIDs) with reduced gastrointestinal side-effects, they have developed a novel diclofenac (DF), a kind of NSAIDs of phenylacetic acid derivatives, delivery system based on a polymeric prodrug using plasma technique as reported in the awarded paper [12]. They proposed to synthesize a polymeric prodrug of DF for oral administration by coupling the drug to 2-hydroxyethyl acrylate (HEA) by ester linkages and polymerizing the resultant product to get polymeric prodrug. They have successfully synthesized a novel crystalline DF-HEA, which was polymerizable acrylic monomer, from the reaction between HEA and DF by the esterification method. Then the resulted monomer was polymerized in solid state by vibratory milling with plasma-irradiated lactose powders as postprocessing-free initiators. The characterization of the resulting polymeric prodrug powders by ESR and X-ray powder diffraction analysis confirmed their synthesis successfully. Hydrolysis study of the polymeric prodrugs was carried out in three different buffer solutions (pH 1.2, 6.8 and 8.5) at 37 °C. The in vitro release profiles indicated that drug release from the polymeric prodrugs was in sustained manner and highly dependent on pH, in which ca. 9%, 25% and 48% of DF was released in 12 h at pH 1.2, pH 6.8 and pH 8.5, respectively. The obtained results suggested that the polymeric prodrugs could be useful for release of DF in controlled release systems after oral administration. The results suggested that the polymeric prodrug systems investigated in this study can be applied to make a formulation for clinical administration of other drugs as carriers in controlled drug release.

The University of Tokyo

The Photopolymer Science and Technology Award 202101 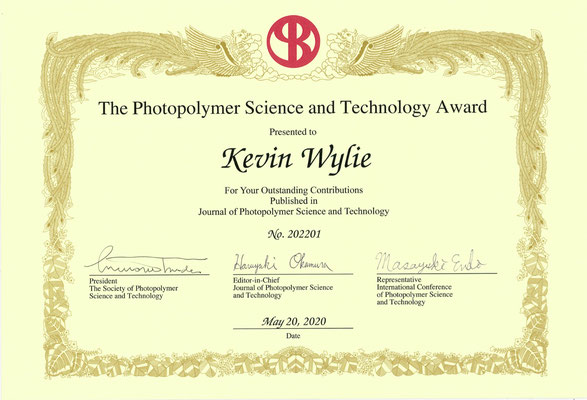 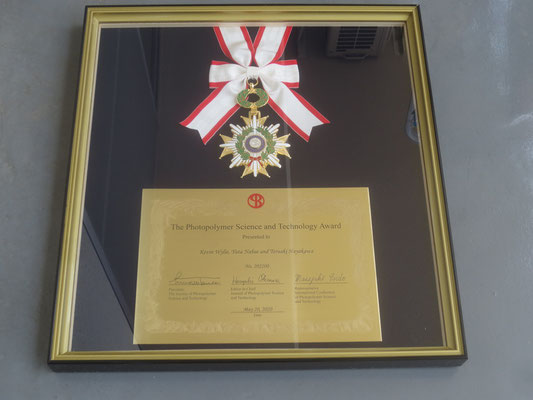 As the demand for increasingly smaller pattern sizes used in microchip fabrication continues in accordance with Moore’s Law, so-called “bottom-up” approaches are of great interest to overcome the optical limits of the current generation of photolithographic techniques. Block

copolymers (BCPs) present a promising way to achieve sub-10 nm patterns using their intrinsic ability to self-assemble into periodic structures with microdomains on the order of 5 nm to 50 nm [1].

Under the appropriate conditions, BCPs will spontaneously self-assemble into various morphologies including lamellae and cylinders which can be used to generate line-and-space (L/S) patterns and dot patterns respectively. This behavior depends primarily on three different experimental variables, the degree of polymerization (N), the volume fractions of each block (f), and the Flory-Huggins interaction parameter (χ). Furthermore, the periodic length (L0) scales with both χ and N above a critical lower limit of χN = 10.5 [2]. Poly(styrene-block-methyl methacrylate) (PS-b-PMMA) is perhaps the most widely studied BCP due to the ease with which perpendicular orientation can be achieved, but is limited to feature sizes of about 10 nm or greater [3]. As a result, recent efforts have mostly been focused on “high-χ” BCP systems which facilitate the decrease in periodic length by decreasing N. However, these high-χ BCPs often have the significant drawback of very dissimilar surface free energies which complicates the perpendicular alignment of the patterns necessary for pattern transfer [4].

As a result, recent efforts by several researchers have focused on modifying PS-b-PMMA with the ultimate goal of enhancing its self-assembly capabilities while simultaneously maintaining the ability to achieve perpendicular orientation in thin films [5,6].

Inspired by these results, Prof. Hayakawa and his group have designed a novel triblock copolymer (triBCP) with enhanced self-assembly behavior by introducing a short, reactive middle block to the traditional PS-b-PMMA BCP.

In this paper, a poly(styrene-block-glycidyl methacrylate-block-methyl methacrylate) (PSGM) triBCP was developed which incorporated a small, reactive glycidyl methacrylate (GMA) middle block which could be further tailored by functionalization with thiols. Using this technique, a variety of self-assembled microstructures could be obtained from a single parent polymer.

Using anionic polymerization which allows for precise molecular control, PSGM was synthesized with a number-average (Mn) molecular weight of 21000 g mol-1 and a dispersity (Ð) of 1.15. Using 1H NMR analysis, the middle GMA block was found to have a degree of polymerization of just six relative to over 200 for the whole triBCP. Two different thiols with strongly dissimilar functional groups were subsequently introduced to the GMA units via the thiol-epoxy reaction which proceeded quantitatively as determined by 1H NMR. Morphological analysis of the bulk state was then carried out using films prepared by slow evaporation from chloroform solutions followed by annealing at 180 °C for 24 h followed by analysis by small-angle x-ray scattering (SAXS) and transmission electron microscopy (TEM).

The SAXS spectra obtained show a clear difference between the modified and unmodified triBCPs suggesting that the introduction of the strongly dissimilar functional groups had the desired effect on self-assembly. In the case where 1-thioglycerol was used to introduce hydroxy groups, the lamellar morphology of the original parent triBCP was conserved but with a 25% increase in L0 to 24.8 nm, indicating a large increase in χ since N and f remained largely unchanged. Estimation of the increase in the effective χ parameter (χeff) using the theoretical scaling law of L0 (here is mathematical eq. please refer the Journal text) , the χeff of the sample was found to have increased by a factor of 5. On the other hand, when a liquid crystalline perfluorinated alkyl chain was introduced, the self-assembled morphology changed dramatically to a complex phase consisting of a double array of tetragonal cylinders with two periodic lengths of 20.4 nm and 14.6 nm as determined by SAXS. In contrast, diblock copolymers are not typically able to self-assemble into periodic tetragonal arrays, so this result is a promising step towards an industrially relevant morphology. Thus, PSGM, with its tunable morphology and periodic length is a promising candidate for the future of block copolymer lithography.

As described above, the authors have demonstrated comprehensive fundamental research on a methodology for preparing a BCP for self-assembled patterns with tunable morphology and periodic length. These interesting research results were presented at the Annual International Conference of Photopolymer Science and Technology in 2019 (ICPST-36) and published in Journal of Photopolymer Science and Technology (2019). This paper contributes to the understanding of the fundamental aspects to form self-assembled nanostructures.